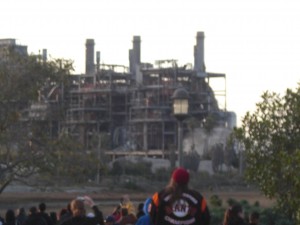 By Pierce and Jackson

On February 2nd 2013,we both watched the South Bay Power Plant implosion in person.  Pierce said, “Me and my mom woke up at 5am.  We got coffee and donuts and went to see the power plant on San Diego Bay in Chula Vista blow up.  I was in my pajamas.”

The South Bay Power Plant was built in the late 1950s and first began producing energy in 1960.  The plant was blown up because it was old and they wanted to use the space for different stuff. To bring the plant down, they used 200 pounds of detonating charges to set off more than 300 pounds of dynamite.   Pierce said, “I could feel the concussion from where we watched the explosion.  The air pressed against my body, it felt like I was in a mini hurricane, pushing me around.  The explosion was loud to my ears.  It was not a pleasant feeling, but seeing it was worth it.  It was exciting.”

Check out this video SoBayImplosion (3)

Attribution: Picture and video taken by Monica and Pierce Curry.