Did you know that one of San Diego’s MOST famous “celebrities” had four legs and a tail?! I had no idea that San Diego even had a town dog until my Grandma and my Mom told me about “Bum the Dog”!

When I heard that San Diego had a famous town dog, I wanted to find out more about “Bum” and what made this Half-St. Bernard/Half-Spaniel dog an important historical figure in San Diego’s history!

I wondered…how did Bum get to San Diego? How did he get the name “Bum” & what made him become so famous? Is there a memorial to Bum in San Diego? I had SO many questions that I decided I needed to do some investigative research to find out all the answers… and share them with… Y-o-u!

I was surprised to discover that Bum arrived in San Diego as a…stowaway! Bum was a stowaway aboard a steamship called the Santa Rosa. He traveled on this steamship all the way from San Francisco to San Diego way back in 1886! I couldn’t believe it! This was proof that Bum was a very adventurous, independent, and brave dog.

I also found out that Bum even had a couple books written about him! In the book: The Dog That Belonged to No One, the author Gerald A. Schiller wrote about how Bum got his name. I read about how Bum liked to hang out with the local “newsboys” (the town boys who sold newspapers on the streets of downtown San Diego).

In this story about Bum, the author wrote that one of these newsboys said:

“Well, I’ll be darned. You don’t seem to need my help in bummin’ some food – or maybe stealin’ it. Hey, there’s a name I can call ya. Bum. You’re just a bum, with no home or owner. But ya sure can bum food if ya need it, I guess. Then I think I’ll call you Bum!” 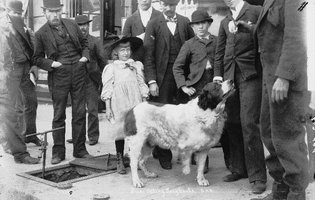 Also according to the journalist Richard Schulte, “His name suited him because he arrived as a town stowaway, befriended everyone and “bummed” quality food from the local eateries.” (Can you believe that some restaurants even put up signs in their windows that said: “Bum Eats Here”!?)

So, that was how Bum got his name, and it stuck with him his whole life! From that moment, he was forever “Bum”.

The townspeople of San Diego adopted Bum and he became San Diego’s first (and only!) town dog!  Bum enjoyed many adventures during his life in San Diego. Some of his adventures included racing along with the horse drawn fire engines on the way to a fire, traveling by himself to Los Angeles and back to San Diego by train, officiating at town parades, and even greeting visiting dignitaries, such as U.S. President Benjamin Harrison! Bum even survived being hit by a train while he was fighting another dog on the train tracks! (Sadly though, Bum lost his right forepaw and part of his tail in this fight.)

Bum also survived a serious injury, after he was kicked by a horse!

When I visited the Gaslamp Museum at the Davis-Horton House, I found the special memorial to Bum, and also a lot of interesting facts about Bum!

I found out that Bum was so beloved by the citizens of San Diego that the city gave him a lifetime dog tag…Bum didn’t ever have to pay a dog license tax!

Bum was also declared “San Diego’s Official Town Dog”, and they even put his picture on “Dog Tax Receipts” of 1891.

When I was reading the plaque about Bum that is located next to the statue of Bum in the pocket park next to the museum, I noticed that pennies were left on the plaque and I wondered why. The lady at the museum told me that the pennies were symbolic of when Bum died on November 10, 1898, and the children of San Diego collected pennies for a proper funeral for Bum.

(I also left my own pennies for Bum on the lower left corner of the plaque!)

She told me that although Bum’s actual grave is not really known, this memorial statue of him is the first memorial to a historic animal in the State of California!

Bum was a remarkable street dog who won the heart of San Diego. Bum’s personality, survival skills, and independence brought San Diego together.

It’s no wonder that Bum the dog became San Diego’s famous first (and only!) town dog!  Make sure to visit the memorial to “Bum the Dog” the next time you visit the Gaslamp District in downtown San Diego…and remember to leave a penny for Bum!