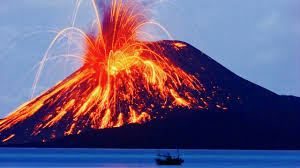 Have you ever wondered what a volcano is or why they happen? Imagine you are in a hotel enjoying the view by the volcano Mount Saint Helen’s, then suddenly BOOM  out of nowhere ash and smoke start spewing out of the top. Then you see that half of Mount Saint Helens is gone. You see smoke coming your way but lucky you get into your car and drive away as fast as you can.

What is a volcano?

A volcano is a mountain that opens downward to a pool of molten rock below the surface of the earth. When pressure builds up, eruptions occur. Gases and rock shoot up through the opening and spill over or fill the air with lava fragments like lava and ash. Eruptions can cause, lava flows, hot ash flows, mudslides, and avalanches. Volcano eruptions have been known to knock down entire forests like the one by Mount Saint Helens, the whole forest was gone. Volcanoes are formed when magma from within the Earth’s upper mantle works its way to the surface. At the surface, it erupts, and forms lava flows and ash. Over time as the volcano continues to erupt, it will get bigger and bigger.

Why do volcanoes erupt?

What is the Ring of Fire?

Why are volcanoes good for the earth?

Volcanoes are good for the Earth because they provide nutrients to the surrounding soil. Volcanic ash contains minerals that are beneficial to plants, and if it is very fine ash it is able to break down quickly and get mixed into the soil quickly. Volcanoes have formed many islands, mountains and parts of continents. Igneous rock is the rock that is formed by cooled lava and It helps build roads. Also, beautiful stones like amethyst are turned into jewelry. Pumice is a natural glass that helps polish and grind stones and metals. It is also used in making hand soap and other household items like cleaners. You know we have global warming if volcanoes erupt the ahs will cool down the Earth and make it better.

Did you know that a volcano can reach temperatures like 2,000 degrees Fahrenheit or 1200 degrees Celsius? Volcanoes are very cool and interesting but very dangerous. People who live by volcanoes are endangered and constantly having to move. Scientists are studying volcanoes to better predict earthquakes and eruptions and make life safer for people who live near volcanoes.

Posted May 2, 2018 by stella in category Science & Tech, Student Posts