You are the panda bear munching on delicious bamboo straws. WOW! Look out your little baby panda bear almost got tackled by a snow leopard! This article is about panda extinction and a few other facts, do you think pandas are going to go extinct? You should definitely read this article because if you love pandas and just want to know every single bit about them then, read this article!

Giant pandas are becoming extinct because of extensive habitat loss and destruction by hunters. Habitat loss destroys bamboo, which is the giant panda’s natural food source.

Pandas have to eat a lot of bamboo. This is because they do not digest bamboo very well. Pandas can digest only about 17 percent of what they consume. Pandas have to eat a lot of it so they can get nutrients from it. The study notes that the bears evolved from omnivorous ancestors but likely began to specialize in bamboo-chomping 7 million years ago. But in that time, they haven’t evolved to become efficient at breaking down cellulose. As a result, the panda’s stomach and intestinal system are more similar to a carnivore than a vegetarian.

Pandas became endangered on January 23 1984. Throughout many years, the lives of these Giant Pandas have been severely impacted by mainly habitat loss.

A pretty long time ago pandas lived in a large portion of China. Now they only live in a very tiny fraction of what used to be a big area. They live very close to Chang River and Huang River.

Usually, the characteristics of a panda are:

To prevent pandas from going extinct people are donating money to panda societies. There are also panda clubs, and the new San Diego zoo is raising some pandas too! If you kill a panda you will be fined. New reproductive technologies that will help preserve sperm and egg DNA for future breeding.

The giant panda is a conservation reliant vulnerable species. A 2007 report showed 239 pandas living in captivity inside China and another 27 outside the country. In December 2014, 49 giant pandas lived in captivity outside China, living in 18 zoos in 13 different countries.

Some of the famous pandas that everyone knows about are:

Su Lin is a one of a kind brown panda, brown pandas are actually very rare like Su Lin. Here I’ll show you a picture 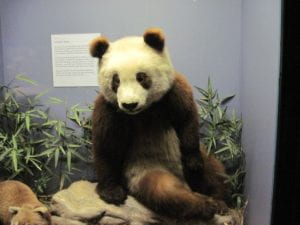 This is Su Lin

In 2017 a record 42 giant pandas were born at to breeding stations of the China Conservation and Research Center for the Giant Panda On September 6, 2006, 9-year-old giant panda Lun Lun gave birth to a cub. According to Zoo Atlanta, which hosts Lun Lun and her mate Yang Yang, this was only the fifth cub born in the United States since 1990. Since four United States zoos host breeding pairs of pandas, this number might seem a little low.

If you want to help take care of pandas then you should tell people to start to care for pandas. You can tell the government to stop cutting down bamboo because that’s where pandas live and eat.