Malala Yousafzai speaks at World Bank headquarters on the International Day of the Girl.

If women in Pakistan are not educated, their child probably won’t have a good future. For example if the mom is not educated she might not talk in correct grammar in front of a newborn kid and the child might not talk well later on. That is only one reason. Imagine all the things that could happen to a child that is raised by a non educated parent. It is a forever going list, huh? My mom makes dinner for my family most nights. If she was not educated it would have too much or not enough of something. Do you know how you would do without an educated mom?

Women and girls in Pakistan deserve equal rights to men and boys. It is unfair and cruel to be treated like that. Most women and girls are offended and mad. What would you do if you were a girl in Pakistan? It makes no sense to treat women like this because we are almost the same as boys except for our gender. This reminds me of Martin Luther King Junior because he fought for black rights a made a difference in our world.

If women are educated they can make changes to our world too. Women have made huge contributions to our world. If Marie Curie, Sally Ride, Amelia Earhart, Harriet Tubman, Rosa Parks, Anne Frank, Eleanor Roosevelt, even Sacagawea. Now there is a brave girl named Malala Yousafzai who is fighting for women education. She started as a kid wanting anybody’s rights and then started discussing this to the world because not a lot of people knew then but know many more people know, like you! She got shot at when she was 14 because her beliefs were not accepted and they tried to stop her from adding on to her thoughts of making changes in her country. She is alright now and still fighting for freedom. She was asked to talk on the news in London because of her amazing thoughts and courage. I think Malala Yousafzai is going to make a change in the world for her country and others.

To sum it up today lets see what we learned. If people make a change new women can make a contribution by inventing something or find cures for diseases. Women and girls would be happier, feel more respected, and have education if Pakistan’s rulers changed their minds. I think women and girls in Pakistan deserve an education.

From 1850 to 1930  thousands of kids were living on the street and were made fun of and considered “street urchins”. From 1854 to 1928 Charles Loring Brace began the Children’s Aid Society. Later, he decided to help the poor children he knew were innocent. His idea was to make a train that carries children to go to west states, in only a few days notice, out of big cities like New York into the western states. They only were taken to places in America to get to new homes. The children were lined up while people gawked at them and chose the one they wanted and left carelessly if they did not want any of them. If they were not chosen they went back on the train to another state. Though some got bad homes that made them work to the bone others got good homes with food, love, shelter, and beds and warmth. The last train took off in 1992 and 200,000 new programs appeared to help the homeless from the streets and the orphan trains ended. 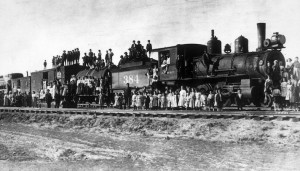 From the book Orphan Train by Christina Baker Kline This poison oak is flowering.

Do you know the saying, “Leaves of three, let them be.”?  Did you know it is about poison oak? Poison oak is called poison oak for a reason, it’s poisonous. Poison oak is a plant that can be either a vine or sometimes a bush. There are different kinds of poison oak. West Poison Oak grows in the canyons around San Diego. Rose Canyon is full of poison oak. . It grows all along the west coast from Baja California, to California, to British Columbia in Canada.

Poison oak looks very different at different times of the year. In the fall the leaves get red and orange. In winter, the three leaves separate and fall off and we touch them thinking they are normal leaves. In spring poison oak has new leaves of three so let them be. Lastly, in summer they are still like spring and they grow berries and flowers that are poisonous. One very poisonous part of poison oak is the berries. They have greenish flowers and poisonous waxy white berries. The berries on poison oak are as poisonous as the leaf. If you ever come up to poison oak or berries and flowers The poison oil, on the leaves react to our skin when we touch the leaves surface. When we touch the leaf its oils itches our skin. Its oils react to our oils on our skin and the rash is a red blistering rash. Which causes a rash that if you don’t cure right away it will get worse because its oils will spread onto our oils.

When you go to a canyon make sure you don’t touch any plants with three leaves. A way to remember it is “ Leaves of three let them be”. Remember it’s Toxicodendron Diversilobum (poison oaks real name).

By Eeekster (Own work) [CC-BY-SA-3.0 (http://creativecommons.org/licenses/by-sa/3.0)], via Wikimedia Commons