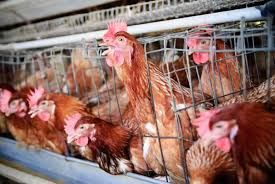 Many chickens are stuffed together in each cage just to get their eggs.

Have you ever heard about those factory farms that adults are always talking about? Well, I’m gonna show you why we should ban them. First of all the factory farms produce more CO2 than volcanoes and that is causing global warming. Also, It is one of the worst forms of animal abuse right next to keeping exotic animals as pets and Bullfighting.
To start it off, factory farms make about %86 of the carbon dioxide in the atmosphere. That is like 8 times more carbon dioxide produced than volcanoes! Carbon dioxide traps heat inside the atmosphere and that is what has been causing global warming. The planet Venus’ surface is completely covered in carbon dioxide making it the hottest planet in the solar system! And it’s not even the closest to the sun! Would you like to boil alive like venus?
To make things worse it is a severe form of animal cruelty. Like in the picture above many animals are smushed together in order to get more eggs. This is very painful and uncomfortable to the animal. If you want this to stop you should say something.
Category: Animals, Current Events & News, Environment, Health, Nature, Student Posts | LEAVE A COMMENT