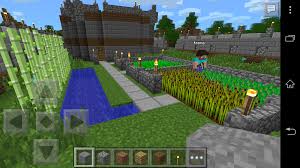 Minecraft is a great game.

Do you know what Minecraft is? If you don’t know  it is a video game that many people around the world play. The main developer of Minecraft is Notch (Markus Persson) who in 2012, handed the job over to Jeb (Jens Bergensten).

Minecraft was first released in 2009. In 2010, Minecraft moved to the Alpha stage. In 2011, Minecraft won many game awards. In 2013 Minecraft got “the Horse Update” that ads horses and lots of other  really cool things. In 2014 Minecraft gets The Bountiful Update. It includes many new  items and lots of new mobs like endermites, guardians, and rabbits.

Minecraft is a game were all the items are shaped like cubes. There is no rule of physics, because all the blocks besides gravel and sand can float in midair without any support.

In creative mode you don’t have to worry at all about survival. Mobs (monsters) don’t attack you, you can fly(it’s really awesome), and you have every single block that’s possible to build with. In Creative mode you have an unlimited source of blocks.

In Survival mode you have to survive(of course) monsters, big drops, lava, and drowning. You have to gather resources to Survive and build a house. You have to craft all of your tools and items using a crafting table and smelt ore in a furnace. But that doesn’t stop you from building cool things in survival, but you have to gather all the resources but it’s still lots of fun.

With Multiplayer you can play with your friends. You can build amazing structures by working together in creative or you can survive together in Survival and battle of monsters. Either way Multiplayer is really fun.

Redstone kind of like electricity, but you have to mine it, deep down in the ground. With redstone you can make fancy lighting, computers, and many more! With redstone, it’s like programming, but inside the game!

In conclusion, Minecraft is a really cool, complex game. Here is the link to the official Minecraft website.

Minecraft is fun. What is Minecraft? Minecraft is a video game and the entire game is made of blocks or made up of block stuff. The object of the game is to survive and get better gear and stuff. So you can fight monsters and get stuff in caves.

There is a creative mode so you can do and get any thing and do anything. There is also a survival mode and you have to mine and craft stuff. Also if you want when you’re in survival you can play on peaceful mode so there are no monsters and your hunger won’t go down.

Minecraft is very popular and many kids play it. You can also meet your friends if you play online.