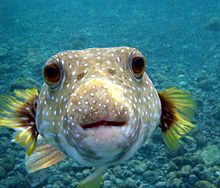 If you think the octopus is the only animal in the ocean that can transform, think again. There are other amazingly deceptive sea creatures. At first glance, they are slow-moving, gentle and beautiful. But beware. When threatened, these fishes can transform themselves into weapons and turn into one of the deadliest creatures in the world. What are we talking about? Pufferfish, of course. Want to find out more about them, well keep reading.

The puffer fish is an omnivore so the diet of a puffer fish includes mostly invertebrates ( an animal without a backbone) and algae. Large puffer fish will even crack open clams, mussels, and shellfish with their hard beaks. Poisonous puffers are believed to synthesize their deadly toxin from the bacteria in the animals they eat.

Although some baby puffer fish cannot be seen without a magnifying glass, their body shape resembles those of the adult animals. The average lifespan of the puffer fish is around ten years. There are more than 120 species of puffer fish which live mostly in the warm waters of the Indian, Pacific, and Atlantic Oceans, with only 30 species that are living in the freshwater. Some species move from marine to brackish or fresh water during the breeding season.  Did you know: After leaving the egg, young puffer fish swim toward the reef’s community.

Pufferfish can inflate into a ball shape to evade predators. Also known as blowfish, these clumsy swimmers fill their elastic stomachs with huge amounts of water (and sometimes air) and blow themselves up to several times their normal size.

Almost all species of puffer fish contain a toxin (called tetrodotoxin) that can be 1200 times stronger than poison. One puffer fish contains enough toxin to kill 30 adult men. The toxin is not located in all parts of the puffer fish, and certain cultures prepare puffer fish as a delicacy. Also, did you know that about 100 diners die each year after eating puffer fish?

Pufferfish are amazing creatures and have plenty of tricks up their sleeves, other than puffing up to scare away predators. To most people, they are some of the most fascinating creatures on this planet. They can do many other cool tricks like turn sand into symmetrical artwork, but unfortunately the current will still wash away its beautiful artwork in minutes. Now I hope you love these amazing creatures as much as I do.