Jose Mujica and His Legacy 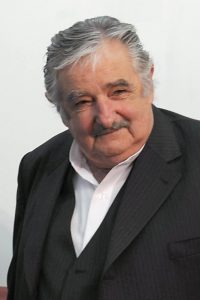 Did you know that Jose Mujica president of Uruguay was nicknamed the poorest president in the world? He was nicknamed that because he believes that you don’t need a lot to be happy, that is why he drives a 1938 blue beetle car. Mujica says, “I am not the poorest president, the poorest are the one who needs a lot to live”. Jose donates 90% of his 12,000 dollars a month salary to charity and instead of buying a presidential private plane he bought a rescue helicopter to help people that need it. Those are some of the ways Jose Mujica was a good president

Before Mujica was president he was in prison for ten years and in that time he basically lived in a hole. The prison was like that because the country was very poor and very tiny. In that prison it was so boring and lonely, all he did was play with the ants. He says when he picked up an ant and put it to his ear he could hear it scream. During his time he had a lot of medical and mental problem because of the way he was treated in the prison.

Jose Mujica helped in many ways like as you know he donated 90% of his salary to charity. But that was not all he did to help. He did not take advantage of his power, he would wait in line at places like supermarkets and hospitals. He didn’t see himself as superior to the rest of the citizens

Another way Mujica was a unique president is he did not live in a mansion with butlers or servants he lives in a small house with his wife. One of Mujica’s passions is farming his land on in his freetime. Unlike many other presidents he chooses not to live the luxury life. ‘’My definition of poor are those who need too much.Because those who need too much are never satisfied’’, states Mujica. He is a very simple and humble man, trying to better his country.

Another thing he did was  legalized marijuana so instead of people going to jail because of it and the government spending thousands of dollars on the people arrested for marijuana they can use the money on charity and more important things -like hospitals, ‘’It is targeting the battle against drug trafficking, every addiction is plague except for love’’ says Mujica .

Jose Mujica also legalized same sex marriage. To make equal rights and opportunities for everyone regardless of their sexual orientation Mujica says,“Its older than the world for us, not legalizing it would be torture to people needlessly.”

Jose Mujica helped in many ways financially and emotionally for many people in Uruguay. Mujica made a difference with his powerful message he spreads around the world teaching others that happiness is on the inside you just need to find it. He also believed that you don’t need money to live a good life. Even though he is not president anymore, he will always be remembered for his kind and generous heart.