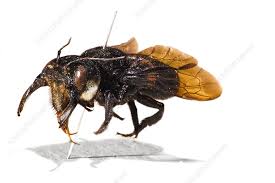 Have you ever seen a giant bee that’s about the size of 4 honey bees? This article talks about how the World’s biggest bee was re-discovered 38 years after first seen. It was found by an American Entomologist whose name was Adam Messer. He first saw the giant bee in 1858 in Indonesia.

In 1981, Adam Messer spotted the magnificent bee on three different Indonesian islands. Since then, many scientists have tried to look for the rare insect, but have had no luck. American natural history photographer Clay Bolt first heard this in the early 2000s. However, his desire to seek out the elusive creature did not begin until 2015. In 2019, Bolt and Wyman went to Indonesian islands with 2 guides of the area. They didn’t find anything until the 5th day. They were walking through an Indonesian island with no hope of finding the massive insect until one of the local guides noticed that the giant insect was 8 feet above the ground resting on a tree. The local guide said this “ it was the most beautiful thing I’ve ever seen”.

Bolt and Wyman hope to work with Indonesian scientists to find other specimens of Wallace’s Giant Bee. finding the massive insect alive in the wild has also renewed hope among researchers that more rare species are alive and well within the Indonesian forests. What would you do if there was a Megachile pluto ( Wallace’s Giant Bee ) by you? Would you panic, run away, or ignore it?