I’m not lying almost everybody has probably gone through a YouTube stage. Personally I admit that I myself am in that stage where everyday I would rush home to go on my ipad to check Youtube. But that’s not the point. The point is that I never wondered YouTube’s history or creator or any facts but it’s youtubers. So I tried doing research and this is my report about YouTube.

YouTube was created in 2005 by Paypal workers. On November 2006 Google bought Youtube for 1.65 billion dollars. YouTube is now an icon when you press the icons for Google. There are other icons such as drive, gmail, maps, and news. Headquarters is located in San Bruno CA. The founders were named Chad Hurley, Steve Chen ,and Jawed Karim. Chen and Hurley had a hard time sharing videos at a dinner party. Karim wasn’t at the party so he denied the party ever occurred. Idea struck. . . something amazing happened after the dinner party. . . YOUTUBE! Janet Jackson at the 2004 superbowl and Indian Ocean tsunami was Karim’s insparation. He had a difficulty finding clips of both videos.  YouTube’s original idea was to make a version of an online dating service called Hot or Not. Youtube’s earliest headquarters was in San Mateo CA above a pizzeria and Japanese restaurant. Youtube.com was made the domain name of YouTube on February 14 2005.

The first ever YouTube Video was titled “Me at the Zoo” of Karim at the San Diego Zoo and was uploaded on April 23 2005 and can be viewed today. Youtube was tested in May before the launch in November. The site grew quickly in fact July of 2006 was announced that Youtube came out with over 65,000 videos a day and a market share of 43 percent and 10,000,000 of video views per day. That was just the beginning because in May of 2010 there were more than 14 billion video views. In october 2006 Google had acquired Youtube for 1.65 billion in Google stock. A typical US person spends 4-5 hours on Youtube according to Wikipedia. Full episodes  of shows and movies on Youtube were meant to compete against other shows, movies, and companies.

Youtube is now a popular website that people go on for videos to laugh, dance, learn, and to have fun. 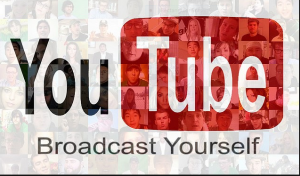 Can you find or name any of these Youtubers?

Posted May 18, 2015 by lemirandan in category Student Posts