Pokemon is a fantasy land of imaginary creatures. Trainers use them for pets to battle or play with it. Pokemon in Japanese it means pocket monsters how can this fit in your pocket? What Pokemon is exactly?Pokemon is magical creatures used for lots of reasons. Who it is you and your pokemon doing what you chose to do. Where the Kanto, region Johto, Hoenn, Sinnoh, Unova,and last the Kalos.Why I don’t know, what do want to do battle, play or as a pet.

Playing Pokemon TCG (trading card game) is very fun from Pokemon from Kanto region to the Kalos region (Pokemon region). But watch out for fakes! Watch this video to find how to identify fake Pokemon cards. They look like this… 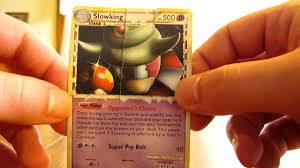 This is not fake it is in a different language

Most of them I have poke blue sister poke crystal.They recently announced the new games alpha ruby and omega sapphire. Pokemon is awesome and many ways to play. What’s your favorite? Share in the comments below.

I like star wars and play Pokemon and like Legos.Every year I go to San Diego Comic Con.

2 thoughts on “Pokemon is awesome”